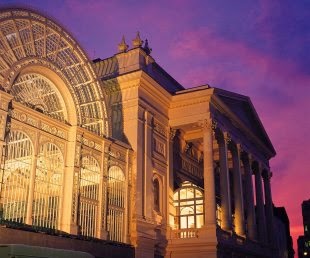 As the days get shorter and the nights longer, it’s time to anticipate the coming attractions of the ROH 2014-15 season.

A quick overview reveals a pretty even-handed distribution of composers this season.  Verdi leads the way with five productions followed by Mozart with three.  No Richard Strauss this year and French opera almost entirely absent – I presume making up for last season’s superabundance of French opera.  Instead we get a fairly even distribution including Rossini, Donizetti, Giordano as well as a bit of Wagner and Weill.  Hopefully something for everyone.

While not having quite the same appeal as last year’s programme, I still think it’s quite an exciting season and there are lots of things I want to see – as well as a few things I’ll probably be giving a miss.

All the details of the 2014/15 upcoming season are here

I due Foscari (Verdi)
Placido Domingo brings his Papa Foscari to Covent Garden and I will be there for two reasons.  One – I’ve never seen this Verdi opera before and two…it's Domingo!  Yes, I know there are mixed opinions regarding his ‘baritenor’ outings (to say the least) but I have a feeling this is a good role for him. And as ever he will bring his exceptional stage presence and musicality to this endeavour which is never a bad thing.

Idomeneo (Mozart)
A new Mozart opera for me and a pretty rare outing for ROH – last seen here in 1989. The UK directorial debut of Martin Kusej should ensure press and public interest and a cast including Matthew Polenzani, Franco Fagioli and Malin Byström should ensure high vocal standards.

Un ballo in maschera(Verdi)
Another new Verdi production and one of my very favourites.  This is an opera full of wit and humour and yet equally dark and brooding – typical Verdi in many ways.  But this is also Verdi at his most brilliant and complex.  I’m looking forward to seeing the production by Katherina Thoma and hearing Joseph Calleja, Liudmyla Monastryka and Dmitri Hvorotovsky  in the lead roles – vocal values will be high although I’m slightly less optimistic about dramatic ones!

Andrea Chenier (Giordano)
Obviously this is THE hot ticket of the ROH 2014/15 season – ticket prices are high and availability restricted due to the presence of Jonas Kaufmann in the title role.  Yes, Jonas takes another bite out of Placido’s repertory, resurrecting an opera last seen in the house in 1985 with Domingo in the title role.  Eva-Maria Westbroek is Maddalena, David McVicar directs and Antonio Pappano conducts. What more could you ask for?

Rise and Fall of the City of Mahogonney (Weil)
I will have to do my homework for this opera as not only have I never seen it before, I've also never heard it before.  Undaunted, I'm planning to be there and I'm looking forward to hearing Anne Sofie von Otter, Willard White and Christine Rice.  The director is John Fulljames whose Donna del Lago I wasn't particularly enthralled with, so I'm hoping for better things.

Krol Roger (Szymanowskii)
More homework required as another opera new to me (and I suspect a lot of the ROH audience) makes its debut at Covent Garden. I've heard very good reports from productions elsewhere so I'm suitably intrigued.  With the added incentive of Mariusz Kwecien and Samir Pirgu in the cast, Pappano conducting and Kasper Holten directing, this could be the dark horse hit of the season.

Guillaume Tell (Rossini)
What?  More homework?  Okay, I vaguely know the music but this is anotther comparative rarity at Covent Garden.  However with a cast led by Gerald Finley and conducted by Antonio Pappano, the audience should be in for a good time.

Anna Nicole (Turnage)
This is the revival chosen to kick off the ROH 2014-15 season and rather commendably, the very first performance is a student only affair.  I’m still debating whether to attend this opera as my tolerance for good-girl gone wrong stories may have peaked with last season’s Manon Lescaut!  But ticket sales are looking rather slow at the moment so still time to grab a bargain.  Eva-Maria Westbroek returns to the role she created in 2011.

Rigoletto (Verdi)
A reliable staple of many an opera company there are two great casts here to tempt – I’ve plumped for Simon Keenlyside as the poisonous court jester, Samir Pirgu as the Duke and Aleksandra Kurzak as the innocent Gilda.  Alternatively you could have Dimitri Platanias, Piero Pretti and Eri Nakamura.  David McVicar’s production is dark-toned – Verdi’s music is glorious.

Il barbiere diSiviglia (Rossini)
This Leiser and Caurier production passed into operatic legend when Joyce DiDonato broke her leg on opening night…and carried on with the performance, not only on this night, but in all subsequent performances.  Hopefully nothing quite so dramatic will happen with this run!  I’m not the world’s biggest comic opera fan but the music should fizz along nicely with Mark Elder at the helm.  Serena Malfi makes her ROH debut as Rosina along with fellow debutant Michele Angelini as Almaviva.  The eponymous barber is Lucas Meacham.

L’elisir d’amore(Donizetti)
More hijinks as Donizetti’s comic opera is rolled out for yet another revival. I missed the last outing with Roberto Alagna as Nemorino – this revival has Vittorio Grigolo who will no doubt ham it up for all he’s worth! Lucy Crowe as Adina will be worth a visit as will Bryn Terfel as Dulcamara.

Tristan und Isolde (Wagner)
Christoph Loy’s production came in for quite a lot of criticism when it was first presented and sight lines were ‘challenging’ to say the least.  ROH have said that some of these issues have been addressed and restricted sightlines will be reflected in the pricing – we’ll see.  Tony Pappano conducts a fine cast lead by Nina Stemme as Isolde, Stephen Gould as Tristan, backed up by Sarah Connolly as Brangane and John Tomlinson as King Marke.  Highly recommended.

Der fliegendeHollander (Wagner)
More Wagner but for once I’m not really complaining.  Bryn Terfel returns as the Dutchman with acclaimed Canadian soprano Adrianne Pieczonka as Senta. Throw in Andris Nelsons conducting and well you can’t really say no!

Madama Butterfly (Puccini)
Hand on heart, I’m not the world’s biggest Butterfly fan…although I do love Puccini. But with Kristine Opolais returning in the title role I’m hardly likely to resist.  Brian Jagde makes his house debut as Pinkerton and the flamboyant Nicola Luisotti leads the ROH orchestra.  Bring a handkerchief.

Die Zauberflote (Mozart)
There are nine performances of this David McVicar production, shared between two casts.  I may give this one a miss as I saw two performances at the most recent revival.  Casts are very good if not ‘starry’ – Toby Spence and Janai Brugger, alternate with Pavol Breslik and Christiane Karg.  It’s a very enjoyable production and if I do give in and buy a ticket I may be swayed by the Breslik/Karg combination.

Il turco in Italia (Rossini)
Oh Lord!  What is it about comic operas this season?  Anyway, that notwithstanding I’ll probably attend as I’ve never seen this on stage before. Another colourful production by Leiser and Caurier, and with a cast led by Ildebrando d’Arcangelo and Aleksandra Kurzak it should be enough to make the evening go with a swing!

La Traviata (Verdi)
Yet another batch of performances for this ROH and audience favourite. There are 16 performances in total so if you miss one performance there’ll be another along shortly!  Two casts share the honours; Sonya Yoncheva, Ismail Jordi and Franco Vassalo kick off the run with Marina Rebeka, Dmytro Popov and George Petean picking up the baton later.  And if that wasn’t enough excitement, Domingo jets in to give two performances as Giorgio Germont.  Personally I’d probably go with the Yoncheva cast and I wouldn’t mind catching Domingo as this is one of his better ‘baritenor’ assumptions.

La Boheme (Puccini)
Yet another audience favourite and another excuse to schedule 11 performances. However, this is the very last chance (honest!) to see this venerable John Copley production as we are assured a new production is forthcoming.  In the meantime, this last outing has been very starrily cast indeed – Anna Netrebko and Joseph Calleja are down to lead off as Mimi and Rodolfo with Lianna Haroutounian and Piotr Beczala very respectable alternatives.  Personal preference draws me towards the second cast but also the very real suspicion that Ms Netrebko won’t actually turn up!  Given that her current roles now include Lady Macbeth, Manon Lescaut and Leonora in Trovatore, I find it difficult to believe that she’ll be singing Mimi next year. We’ll see.

Don Giovanni (Mozart)
A quick revival for Kasper Holten’s somewhat controversial take on Don Giovanni.  You can read my opinion here so I can’t see myself making a return visit despite the attractions of Christopher Maltman’s Don,  The rest of the cast are decent enough too with Alex Esposito returning as Leporello and Rolando Villazon appearing in his new guise as a Mozart tenor.  Alain Altinoglu conducting should also provide some fireworks.


I wish I loved this opera.  I like it….but I just don’t love it.  I certainly don’t love it enough to go and see it again in this production.  It’s a good production but it's just okay and the final act doesn’t really work as it should.  But it's okay. Ambrogio Maestri returns to the production as Falstaff with Marina Poplavskaya currently down to sing Alice Ford – but don’t hold your breath!  Unfortunately Popsy has been cancelling assignments left, right and centre so unless she has sorted out her problems by next year then expect a replacement to be announced.