I've probably said this before but I don't normally do first nights.   I like to see the production and singers once everything is 'bedded in' as it were.  However, Since this particular first night fell on a Friday, and was one of the few dates I could actually get to see Faust, I brushed aside any hesitation and booked.

Of course, when I originally booked for this opera, Anna Netrebko was scheduled to sing Marguerite - something I looked forward too as I've not managed to catch this diva live before.  Alas, I (and countless others) were to be disappointed when she pulled out citing role incompatibility. I tend to agree with her assessment, however the late timing of this announcement left something to be desired.  A replacement was hastily arranged and luckily for us, Sonya Yoncheva, a young soprano making a name for herself,  shuffled her hectic diary and agreed to step in.

The rest of the cast was not to be sniffed at either; Joseph Calleja as Faust, Simon Keenlyside as Valentine and last but infinitely not least, Bryn Terfel as Mephistopheles.  With such a cast, you can understand why this was a highly anticipated event for the Royal Opera. 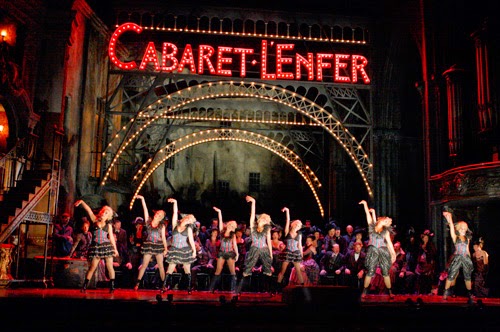 Okay, another confession.  Before this performance I'd never seen Faust on the stage before!  Yes, I know.  It seems totally shocking even to me.  Faust is one of those opera that is almost compulsory it seems - or at least to me.  Don't get me wrong, its not like I don't know the music, but somehow actually attending a live performance had seemed like something I could do another day - I didn't feel any strong compulsion to investigate the opera further.  However with this cast I really couldn't resist.

In the title role, acclaimed tenor Joseph Calleja delivered the goods with some lovely heartfelt singing and an especially good 'Salut, demeure chaste et pure.'  However, I want to like the voice more than I actually do.  I recognise it as an impressive voice but I don't love it - possibly the distinctive vibrato which marks him out from his peers is slightly too much for my personal taste.  But as I say, his is an important voice but just not one that personally appeals.  His acting is limited but on this occasion he threw himself into the action without necessarily revealing any particular insights.

Sonya Yoncheva I have encounterd twice before; once in a Domingo Operalia concert (she was a previous winner) and the next time as Musetta in La Boheme.  As Marguerite, she finally came into her own at Covent Garden.  The voice is distinctive, secure, lovely and lyrical - ideal for this role.  If her trills in the Jewel Song were a little approximate then no matter - she made up for it with a finely characterised portrayal which tugged at the heartstrings in the finale.

I like Simon Keenlyside.  A lot.  I think he is a very fine singer and actor.  However, I'm not entirely sure why he is singing Valentine.  Nostaglia?  Because there just doesn't seem enough for him to do here in comparison to the rest of the cast.  Yes his aria was nicely sung and yes he also had a very good death scene - but is that enough when there are so many other roles he could be doing? Given the stellar company in which he found himself, I also found his voice less immediately 'distinctive' than Yoncheva, Calleja and Terfel. 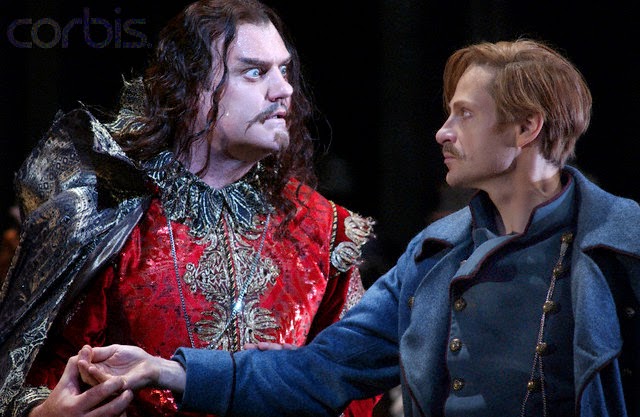 As yes, Terfel.  Possibly my main reason for booking to see this opera.  I have a bit of a bass-baritone thing going on at the moment and I was keen to see Bryn away from his usual diet of Wotan, Scarpia and Falstaff.

I was not disappointed.  He strides through this production like the devilish operatic colossus he is! He dominates every scene that he appears in - with force of presence and cannily managed vocal resources. According to some comments he is not as good as in younger days.  I have no idea as I never really heard him sing when he was younger, so I have nothing to compare him to.  To me he was the very embodiment of the Devil himself - probably one of the best operatic actors on the stage today.

I've not spend much time on David McVicar's production but I enjoyed it very much.  I've seen people (me included) describing it as a 'show'.  And that's exactly what it is.  There is so much going on, so many scene and costume changes, that it sometimes resembles a Broadway or West End show.  But that's not a criticism at all and this would probably be an ideal starter for the operatic novice.

Having said all of this, I now find myself wondering if I really want to see this again - I have a ticket for another performance.  This is more a reflection on the opera itself, than any criticism of the performers.  Even with such a cast, I'm not sure that seeing Faust again would give me any added insights.  Then again, the chance to see Bryn in action might just sway me!